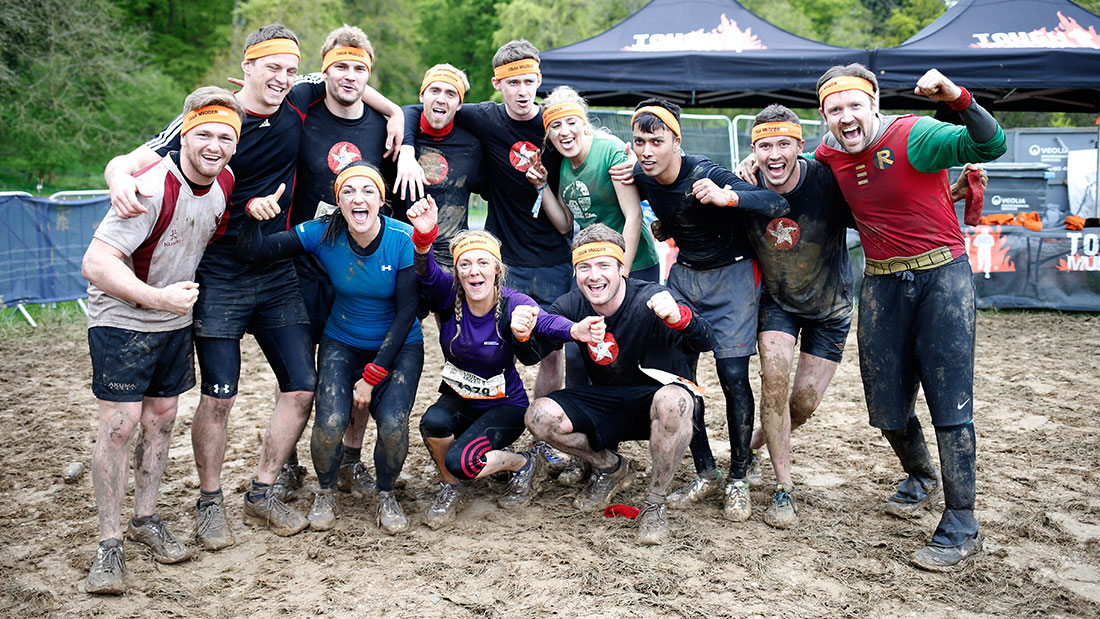 After agreeing to sign up to Tough Mudder 2014 a few months back, I don’t think any of us quite realised what we were letting ourselves in for. I for one thought it was 12km with 25 obstacles, the moral was quickly smashed when I realised half way round that it was actually 12miles not 12km!!!!

So to get us warmed up and entered into the Tough Mudder fraternity, after mile one we faced a tank full of muddy ice water with a wall half way through to ensure you fully submerge yourself….hypothermia successfully setting in we cracked on up and down some of the muddiest, steepest climbs and descents you could find in the chilterns, bodies flying all over the place it was hard enough to walk some of them let alone run!!

Our group was in pieces, with some cut and bruised, we had a wrecked back, one hobbling with a ruined knee and EVERYONE almost hypothermic we made it through the 12miles together to tackle the last two obstacles….”EVEREST” and  “THE ELECTROCUTION THERAPY” before we could cross the line and taste the celebratory beer. EVEREST can only be described as a skateboard half pipe, where you had to run half way up and throw yourself near the top so that those who had already made it to the top could grab you and pull you up by whatever you could grab, arm, hand, leg, arse…..whatever it takes!! Finally we all tackled it and in true teamwork made it to the Electrocution Therapy. Which consisted of hanging wires 5metres wide and 10metres long that produced 10,000volts of electric shock “therapy”!! I was last through and given the encouragement and advise of running as fast as possible rather than trying to dodge the wires….so that just what I did, head down I sprinted, which was going well until I took a wire to the temple, passed out momentarily, apparently hitting the deck like a sack of shit with hands by my side!!! Luckily I regained consciousness just as I hit the floor and managed to stumble through to the end!

Battered, bruised, and just about conscious we crossed the line over 5hrs later just as we started, all together, succesfully entering the prestigious (and mental) legions of Tough Mudder!!

So if you think that enduring 12miles of hypothermic conditions, and taking 10,000volts of electricity to the head is worth 10quid then please check out our justgiving page and give to a very worthy cause: