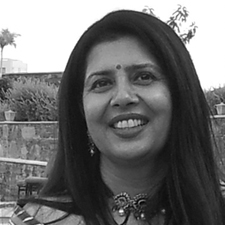 Smriti was born of a royal lineage, with all of her comforts tended to. As a child, she watched the children of the staff at her palace and even others from the village who came to play and see the fascinating sights of the palace and its grandeur. They became her playmates and she never understood why they were different and why they had certain hardships. Smriti liked to be their nurse. She dressed their wounds, shared her toys and the happy glow on their faces was the best part of my day. She shared these joys with her father who encouraged her to do more for them when she was big and capable of contributing to the world.

Once Smriti was married, she moved to Jaipur. After taking care of the responsibilities of the family and after her daughter was grown up and moved out for her education, she wanted to take up her passion of doing some good for those who are not as privileged as she was. She knew she needed money to start helping people and Smriti decided that she would generate funds herself. She started designing traditional bridal wear for export and for four years, she worked hard to make enough money to start her passion.

She started off by working with street children in the slums of Jaipur informally. For one year, she visited the Railway station platforms and taught them moral values. Her goal was to bring them back to the world away from drugs. She rented out a room close by to start her efforts at providing them some vocational education, meals and entertainment for these children. After facing many episodes with authorities on working without a certification, she registered the organisation “FAITH” as a Non Governmental Organisation (NGO) on 9th May 2005.

Since then, she was happy to know that she made a difference in some possible way. One of those children today has topped his school (Care Public School) in the tenth standard Rajasthan Board exams.

Smriti recognised that many other organizations were working with the street children as well. Knowing that they had help coming from others, she wanted to direct her efforts to another section of children who were discriminated and set aside. She read in many magazines and newspapers that HIV positive children faced a stigma in the society, leaving them abandoned and uncared for. These children missed having a home, education and basic health care.

Smriti writes; “I wrote to Rajasthan State AIDS Control Society (RSAC) with my desire to provide these children a home and a normal life. RSAC circulated my letter amongst the government hospitals, where the children across the state go to get their Anti Retro Viral treatment (ART). The doctors there recognize those children who need care and support and I bring them to Aalingan, a hope that I have set up for these children. The children are either abandoned by relatives or are orphans”.

Aalingan had two children to start with and today they have twenty eight children. The first child that came to her was a six and a half month old boy. Doctors were not hopeful about his living but Smriti agreed to take the child into her home with the intention to give him whatever best I could for his remaining life. Today the child is four years old. Aged anything between three years to sixteen years, all these children are now a part of her family.

With two full time caretakers, enthusiastic volunteers and generous friends who contribute to this dream of hers are now able to provide these children with a home to stay in, daily meals, toys and education.

All this would not be possible without the support from two of her friends. Timmy Kumar from Clarkes – Amer hotel sponsors lunch for the children, and Varsha Singh who is a big support in all possible ways. Other organizations help us to celebrate festivals, while others contribute by donating toys, linen etc. But she knew this would not be complete without the children’s education. This was one major hurdle I faced. The society does not go easy on these children and the discrimination and stigma follows them everywhere. After much struggle, she managed to get all her children admitted in Disney Public School.

These children also learn a lot through the volunteers. They enjoy learning arts and crafts, music, dance etc. FAITH has very senior doctors from hospitals across the city, who volunteer to treat these children when they fall sick. Aalingan doesn’t just provide children a roof, education and food. The idea of this place is to create a real home, and this means that there are celebrations of festivals, birthdays and other activities. They have picnics, lunches at McDonald’s and other such things that any child would enjoy.

FAITH is an organization that believes that with enough awareness and help, these children and those in the future would be one day free of the stigma that they face, and their lives would be easier and normal. They would continue giving the best that they can for the children who are with them and look forward to taking care of more children. But through all this, they will continue to also create a positive and realistic image for these children, without any prejudice and discrimination. One day hopefully there will be no child who needs FAITH.