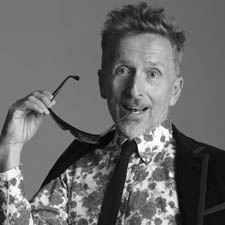 He has written five books: ‘Confessions of a Window Dresser,’ ‘Wacky Chicks,’ a memoir entitled ‘Beautiful People’ and a tongue-in-cheek style guide entitled ‘Eccentric Glamour.’ His latest book is ‘Gay Men Don’t Get Fat’. He has written regularly for The New York Observer, The Daily Beast, and currently writes a column for SLATE entitled ‘Notes from the Fashion Apocalypse.’

A TV comedy series based on ‘Beautiful People’ has aired the UK, the US and Australia.
Simon has been a regular guest on America’s Next Top Model, VH1, Full Frontal Fashion and The Joy Behar Show.

Simon has won many awards for his window designs including the CFDA Award. In 2009 he was invited by President and Mrs. Obama to decorate the White House for the Holidays. In 2010 Simon was commissioned by Target to design the season’s Halloween costumes.

Simon Doonan lives in New York City with his partner, the ceramicist and designer Jonathan Adler and their Norwich terrier Liberace.