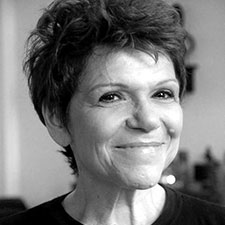 Whatever, whoever, however, wherever she is, she always directs her extraordinary talents toward the issue she believes defines our generation: the question of whether or not we find the collective cojones to seize the opportunity before us end the horrors that disadvantaged children suffer in the developing world.

Working as a journalist, make-up artist, an Artist’s agent and in PR (all before she turned 24), Blake befriended and marketed the Talking Heads in England and the U.S. Her connection to music and the punk movement grew through her relationships with the bands and Artists she loved, The Ramones, Andy Warhol, Jean Michel Basquiat and Blondie to name a few.

The next phase of her life took her back to her motherland of England where she worked for Browns, the most famous fashion house in London, and in film as a producer on a movie about Route 66 and on Larry Clarke’s controversial feature Kids directed by Gus Van Sant.

While her creative career was thriving, many of her friends were not. AIDS was killing many she loved. The virus would eventually claim the lives of 25 million worldwide and infect another 35.3 million men, women and children—while orphaning upwards of 17 million kids.

Bound to Africa initially through marriage, Blake served as the director of Artists Against AIDS Worldwide (AAAW), an organization focused on stopping the spread of AIDS across the African continent. A 2001 AAAW campaign featuring a remake of Marvin Gaye’s “What’s Going On” brought together more than 40 artists including co-executive producer on the project, Blake’s dear friend Bono. It too raised funds for the fight against the deadly virus. (Bono’s impact on Blake is long-lived; her e-mail signature today reads: “Spoiled by Bono.”)

With the money she raised, Blake built a clinic in Kenya in partnership with New York University Medical Center. The clinic delivered AIDS treatment and became the model of many others Blake’s various projects would fund.

In 2003, Blake founded Keep a Child Alive (KCA) to provide life-saving AIDS drugs to children and their families in the developing world. In a classically Blake move, she appealed directly to the public to help underwrite the medicines governments were failing to provide to their people. KCA pioneered the first charitable text message fundraising campaign in the U.S. It went on to conduct the “Digitally Dead” campaign in which A-list celebs went dark on social media until a million dollars was raised for AIDS relief work. It also hosted the Black Ball, an event hosted by Alicia Keys, which has also raised millions for the cause.

Today, Blake is the Founder of Arms Around the Child, a new NGO focused on protecting children from harm and depravity in the developing world.

She goes where few others dare and she goes there far ahead of the curve. And she doesn’t even suggest she’s coming home until it’s all said and done. She’s a fabulous force for good in the arenas of the absolutely bad. Oh, yeah, and the U.S. President takes her call.

To use a few choice Blake-isms, she is mega. Beyond. And she is always willing to wrap her brilliant brain around the world’s most unsavoury problems—while throwing her arms tightly around its most vulnerable children. And we can, we must, we will end the suffering of little children. And when we do those things, it will be in large part thanks to Leigh Blake.