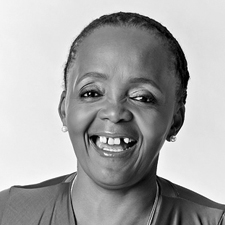 Carol is a mother of five (but has recently lost one of her sons) and a community development agent and social entrepreneur in Soweto township, Johannesburg, South Africa. She was born and bred in Soweto herself. Not only does she care for orphaned and vulnerable children, but for women, youth, elderly people and people infected and affected by HIV/AIDS. She has received numerous international and local awards for excellent humanitarian work in her community over the past 4 years.

She started working in hotels, and then went to study nursing. Due to her passion for community development and the plight of the children affected by HIV/AIDS, she had quit her most admired career, and started her organization in 2001 with a family of 3 in Protea Glen, called Ikageng Itereleng Aids Ministry. She has been heading this organization as founder and director since 2001 and the organization was only registered in 2004 with the help of the late Dr Klaaste.

Her organization now cares and has supported more than 1700 orphaned and vulnerable children in Soweto, by providing them with educational, nutritional, psycho-social and life-skills development support programmes.