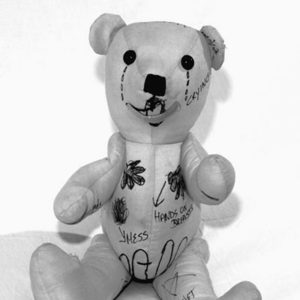 When she was eight, Lindiwe complained to her teacher about regular and severe stomach pains, and a ‘sore heart’. On further questioning, she revealed to her teacher that her step-father was raping her.

The teacher told Lindiwe’s mother, who beat Lindiwe when she got home, and accused her of lying. In desperation, the teacher shared the story with the school principal, who called Operation Bobbi Bear.

A Safety Officer met Lindiwe at school, and using Bobbi Bear, asked her to explain what had happened to her. Lindiwe drew on Bobbi Bear, and revealed that her step-father had been molesting her for many years, and in the last few months had begun raping her, and also molesting her younger sister.

The Principal called in Lindiwe’s mother, who was horrified at what Bobbi Bear revealed, and was devastated for not believing her little girl. Lindiwe and her mother laid charges against the stepfather, and Bobbi Bear began to investigate.

Within 48 hours the police had picked up the stepfather who appeared in court. Lindiwe, her mother, a friend and a teacher appeared at the court room, all carrying Bobbi Bears.

Two years on from this court case, the perpetrator was still behind bars. Lindiwe and her sister have received care and counseling.  Says Lindiwe “Bobbi Bear helped my mother believe me.”