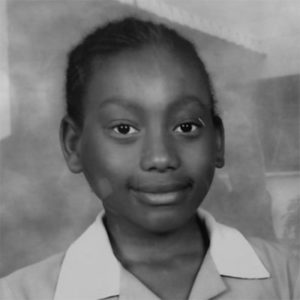 THE atmosphere was charged with emotion, as adults and children openly wept when the body of 13-year-old Angel arrived at the Bobbi Bear house.

Angel’s plight came to light when her school teacher’s noticed her absence and went to her Uncle’s flat who was her guardian, where they found her locked up, starved and not allowed to talk to anyone. They contacted Bobbi Bear. When Angel arrived at the Bobbi Bear house just weeks before she passed away she weighed 27kg and her CD4 count was dangerously low. She hadn’t eaten for weeks and her ARV & TB medication had been thrown away.

Angel couldn’t walk, her legs were so thin and weak, she had to be carried everywhere. She had two large abscesses on her cheeks, sores on her head and complained of her kidneys and liver being sore. Bobbi Bear got her admitted to hospital where she was put on antibiotics and a range of blood tests were carried out. Angels TB was so bad she could not be put on ARVs until the TB was under control. In spite of the medical care given to Angel, she was just too weak. Her body gave up, the abuse was so bad, she couldn’t fight back and she slipped into a coma. Bobbi Bear carers sat at her bedside 24/7 and fought alongside urging her not to give up the fight. She had a painful death and she cried out in pain. She was surrounded by people from Bobbi Bear who cared, loved and pampered her during the last days of her life.”

The deputy principal of Angel’s school had tried everything, all doors were shut, the police were not interested in going to the flat, social welfare kicked them out. Operation Bobbi Bear is urging the authorities to bring murder charges against Angel’s uncle, for withholding lifesaving drugs from her.